As I watch my adopted DR dog Obi sleeping softly by my side, I reflect on our long journey together and of his resilience in overcoming adversity.

Unwanted and left wandering the streets, Obi (formerly Smooch) found himself at the Pound. He had a massive perineal hernia and his chances of adoption seemed low and therefore he was facing certain euthanasia. His plight was brought to the attention of Monika Biernacki and with only one day to spare, he was plucked from the pound and saved.

But this was only the start of the health assessment and medical care that all pets receive from DoggieRescue. Obi needed extensive corrective surgery on his hernia and was admitted to the Cottage Animal Hospital. My husband and I had already put our hands up to adopt him, no matter what the outcome. After a lengthy stay in hospital he was released into our care. The Vet put Obi on a special diet and told us to hope for the best.

We worried that Obi’s homecoming coincided with our moving to the Blue Mountains to downsize. In the midst of hectic preparations, we made sure Obi felt safe and loved. On our arrival in the mountains that summer, Obi adjusted well, even braving the following cold winter with more stoicism than we. With a large garden to explore, his new diet and our loving care, his health improved dramatically.

“ Obi was a quiet dog who was happy with his naps, walks and his food but always checking that we were nearby.” Lori

Unfortunately and to our dismay, the following summer, he was diagnosed with diabetes. The local Vet gave us a choice of euthanasia or our injecting him twice daily with insulin and checking his sugar levels with a glucometer. That was the day I became his nurse. My first attempts with giving injections and drawing blood were harrowing for me but Obi accepted these new intrusions on his body without fuss which gave me hope.

We found the extreme mountain weather too challenging for we humans and so decided to return to Sydney and moved into a Pet Friendly strata apartment. He was a Superstar in the block, always quiet, never barking. Obi adjusted to City living again, enjoying things like carpeted stairs, air conditioning and of course, like ourselves, the warmer outdoors.

“ He wakes from his sleep now, disorientated. I cuddle him and tell him that Mum and Dad love him. Around 15 yrs of age and in sudden deteriorating bad health, we have to accept that we can do no more for him but make his final journey peaceful. “ Lori

Obi received the best of care from all involved with his rescue and adoption. He had the life he deserved and everything that he needed. Obi had seven more years in which he was loved totally. From him, we learnt of the great reservoirs of strength that lay within each of us in times of need. We will miss his quiet dignity.

POST SCRIPT: This started out as a story on Obi for DoggieRescue magazine and in the end became a memoriam to him. In late April Obi lost his battle with life. This story was hard for me to write but I missed him so much today, I had to finish it. It will be a week tomorrow since he passed. Obi had had a tough life, even before his diabetes, but he took everything in his stride and carried on with what was asked of him. On his little box it will say “Our Little Trooper”. He has gone to join, Ruby, Ted, Shep and Toby. 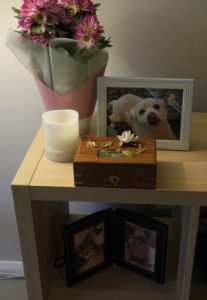