Claus came into rescue just before Christmas 2004 after being pulled from a municipal pound in Sydney, Australia. During his two years in rescue, he was returned by two families for being “too difficult.”

We found each other when I contacted DoggieRescue in December 2006 and asked to foster whichever dog needed a home the most at that time. Claus rode home on my lap and didn’t leave my lap for the first several days. He was on his way to becoming a foster failure from the moment our eyes met, and his fate was sealed when the veterinarian told me three days later that Claus had a very bad heart.

Claus had a lot of training and even an animal communicator to help him as we worked through his issues. He never met a human being he didn’t love, but he disliked almost every animal he met in the beginning. He had strong fear aggression, and he bit me 9 times during the first couple of months when I got between him and another dog. After one particularly bad bite, my feelings were so hurt that I asked myself whether I had made the right decision by adopting him.

Over the next 3.5 years, I learned that I couldn’t have made a better decision. Claus did learn to make some friends, and he certainly showed me just how strong one little dog could be. We moved to America together in June 2008, and Claus looked at the snow with just as much horror as I did. We pulled each other through a lot of things, and he always kept all my secrets. He was my best friend.

Claus lived for his daily walks, and he loved to be covered up under blankets. He also loved to go on car rides, and he got to see several American states. He loved visiting with his grandmother who never got upset with him when he decided to mark his territory all over her house. One of his favorite things to do was to pull all the stuffing out of brand new toys, and yet he never destroyed even one thing that was not his.

Claus knew a lot of commands, and he never failed to give a kiss when asked. He talked with his eyebrows; everyone who knew him commented about the way he could move his eyebrows. He pranced around with so much spirit in his step, and it is the absence of the sound of his prancing across wood floors that now makes our home feel so empty.

What was a Grade IV heart murmur in 2007 grew to become a Grade VI heart murmur, but Claus never had even one symptom until mid-May 2010 when he started coughing and showing exercise intolerance. He started taking Lasix at that point, and he resumed to his normal self until two days before he passed away. His coughing came back, so we increased his Lasix dosage which appeared to be helping him.

He woke up at 5 AM on Thursday, and we had some time outside and then took a little nap before we had breakfast. He cuddled some more with me, and then he patrolled the back yard until he followed me back inside just like he always did unless there was a squirrel or a rabbit holding his attention. Claus loved American wildlife!

Claus was buried under a Japanese maple tree along the banks of the Ohio River in Addison, Kentucky, USA. He is buried between Chessie, my dad’s Chesapeake Retriever, and Cookie, my beloved Tonkinese cat, who both died over 10 years ago.

Claus left behind two much bigger but younger brothers, Oliver the Greyhound and Arthur the Tibetan Mastiff. They both allowed Claus to be the boss.

He took part of my heart with him. 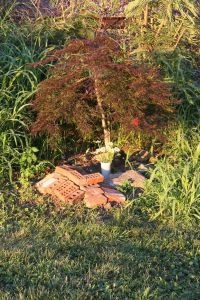